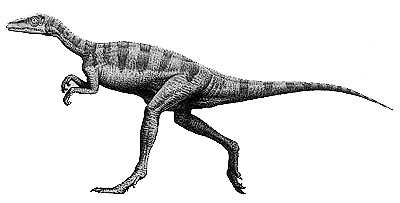 Eoraptor was one of the world’s earliest dinosaurs that lived ca. 231.4 million years ago, during the latter part of theTriassic Period in Western Gondwana, what is now the northwestern region of Argentina. It was a small sized, lightly-built, ground-dwelling, two-legged bipedalsaurischian.

Eoraptor had a slender body that grew to about 1 meter (3.3 ft) in length, with an estimated weight of about 10 kilograms (22 lb). It had a lightly built skull with a slightly enlarged externalnaris. Like the coelophysoids which would appear millions of years later, Eoraptor had a kink in its upper jaws, between themaxilla and the premaxilla. Sereno et al. (2013) observed that the lower jaw had a mid-mandibular joint. It ran digitigrade, and upright on its hind legs. The femur of the holotype specimen PVSJ 512 of Eoraptor is 152 mm, and the tibia is 157 mm, suggesting that it was a fast runner. Its forelimbs are only half the length of its hindlimbs, which would suggest that it was an obligate biped. All of its long bones have hollow shafts. Eoraptor had five digits on each ‘hand’, the three longest of which ended in large claws and were presumably used to handle prey. Scientists have surmised that the fourth and fifth digits were too tiny to be of any use in hunting. The ilium is supported by three sacral vertebrae, unlike that of the coeval Herrerasaurus which is supported by only two sacrals, a basaltrait. Eoraptor had vertebral centra that are hollow, a feature present in some of its ancestors.