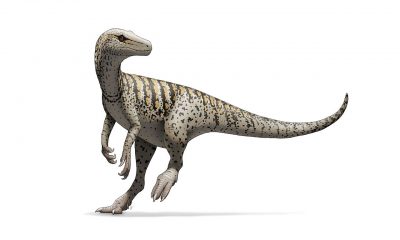 Herrerasaurus was one of the earliest dinosaurs. Its name means “Herrera’s lizard”, after the rancher who discovered the first specimen. All known fossils of this carnivore have been discovered in rocks of Carnian age (late Triassic according to the ICS, dated to 231.4 million years ago) in northwestern Argentina. The type species, Herrerasaurus ischigualastensis, was described by Osvaldo Reig in 1963 and is the only species assigned to the genus. Ischisaurus and Frenguellisaurus are synonyms.

For many years, the classification of Herrerasaurus was unclear because it was known from very fragmentary remains. It was hypothesized to be a basal theropod, a basal sauropodomorph, a basal saurischian, or not a dinosaur at all but another type of archosaur. However, with the discovery of an almost complete skeleton and skull in 1988, Herrerasaurus has been classified as either an early theropod or an early saurischian in at least five recent reviews of theropod evolution, with many researchers treating it at least tentatively as the most primitive member of Theropoda

It is a member of the Herrerasauridae, a family of similar genera that were among the earliest of the dinosaurian evolutionary radiation.