Ornithomimus is a genus of ornithomimid dinosaurs from the LateCretaceous Period of what is now North America.Ornithomimus was a swift bipedal theropod which fossil evidence indicates was covered in feathers, equipped with a small toothless beak that may indicate an omnivorous diet. It is usually classified into two species: the type species, Ornithomimus velox, and a referred species,Ornithomimus edmontonicus. O.

Like other ornithomimids, species of Ornithomimus are characterized by feet with three weight-bearing toes, long slender arms, and long necks with birdlike, elongated, toothless, beaked skulls. They were bipedal and superficially resembled ostriches. They would have been swift runners. They had very long limbs, hollow bones, and large brains and eyes. The brains of ornithomimids in general were large for non-avialan dinosaurs, but this may not necessarily be a sign of greater intelligence; some paleontologists think that the enlarged portions of the brain were dedicated to kinesthetic coordination. The bones of the hands are remarkably sloth-like in appearance, which led Henry Fairfield Osborn to suggest that they were used to hook branches during feeding.

Ornithomimus differ from other ornithomimids, such as Struthiomimus, in having shorter torsos, long slender forearms, very slender, straight hand and foot claws and in having hand bones (metacarpals) and fingers of similar lengths.

The two Ornithomimus species today seen as possibly valid differ in size. In 2010 Gregory S. Paulestimated the length of O. edmontonicus at 3.8 m (12 ft), its weight at 170 kilograms (370 lb). One of its specimens, CMN 12228, preserves a femur (thigh bone) 46.8 centimetres (18.4 in) long. O. velox, the type species of Ornithomimus, is based on material of a smaller animal. Whereas theholotype of O. edmontonicus, CMN 8632, preserves a second metacarpal eighty-four millimetres long, the same element with O. velox measures only fifty-three millimetres. 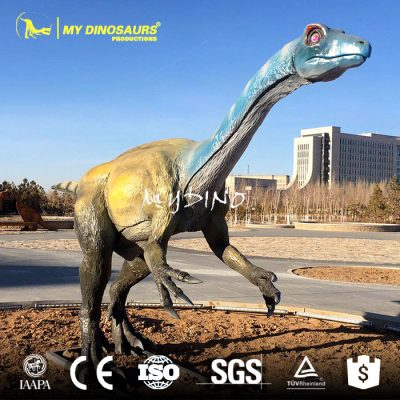 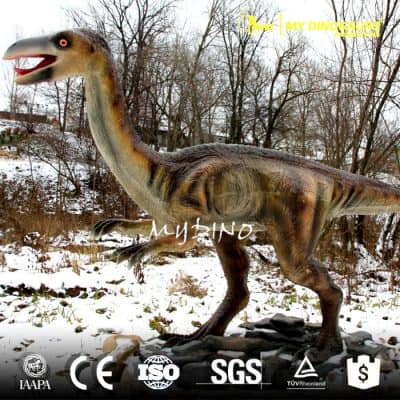