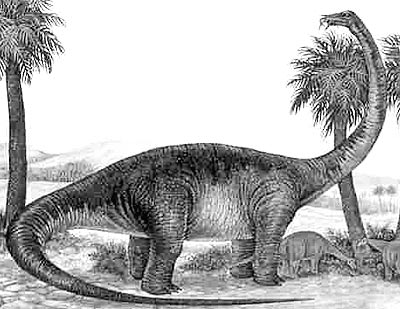 Saltasaurus is a genusof titanosaurid sauropod dinosaur of the Late CretaceousPeriod of Argentina. Small among sauropods, though still heavy by the standards of modern creatures, Saltasaurus was characterized by a short neck and stubby limbs.

Saltasaurus is very small compared to most other members of the Sauropoda, estimated at 12.8 metres (42 ft) in length and 6.87 tonnes (7.57 short tons) in weight. Powell estimated the adult length at six metres. In 2010, Gregory S. Paul estimated the maximum length at 8.5 metres, the weight at 2.5 tonnes.

The teeth of Saltasaurus were cylindrical, with spatulate points. Saltasaurus had a relatively short neck with shortened neck vertebrae. The vertebrae from the middle part of its tail had elongated centra. Saltasaurus had vertebral lateral fossae, pleurocoels, that resembled shallow depressions. Fossae that similarly resemble shallow depressions are known from Malawisaurus,Alamosaurus, Aeolosaurus, and Gondwanatitan. Venenosaurus also had depression-like fossae, but its pleurocoels penetrated deeper into the vertebrae, were divided into two chambers, and extend farther into the vertebral columns. In Saltasaurus, the vertebral bone was generally cancellousand there were larger air chambers present as well. The limbs were short and stubby with especially short hands and feet. Saltasaurus had more robust radii than Venenosaurus. The belly was extremely wide.

The osteoderms came in two types. There were larger oval plates with a length of up to twelve centimetres. These were keeled or spiked and perhaps were ordered in longitudinal rows along the back. The second type consists of small ossicles, rounded or pentagonal, about seven millimetres in diameter, that formed a continuous armour between the plates. A study in 2010 concluded that the larger plates had cancellous bone but that the ossicles had a denser bone tissue.